THE CONTEMPORARY POLITICAL CLIMATE REINFORCES THE FEAR OF THE OTHER. THIS IS A NOTICEABLE BUT NOT NEW POST 9/11 PHENOMENON. THE DISTRUST OF THE OTHER HAS ALWAYS EXISTED – DISTRUST OF PEOPLE FROM THE NEXT VILLAGE, PEOPLE FROM OTHER COUNTRIES, PEOPLE WITH A DIFFERENT WORLD VIEW OR PEOPLE WHO LOOK DIFFERENT.

The twenty-first century brought ‘home’ the reality of violence to a generation in the west that had grown accustomed to thinking that war only happened in some other part of the world, with attacks on London, Paris, Nice, Stockholm, New York and elsewhere. In the interests of increased security it has been advantageous for the political elite to exploit this innate fear of the other and to compress in it into a fear of foreigners by reinforcing ideas of nationalism and cultural identity. Catarina Kinvall and Jitka Lindén argue: “Categories of us and them, home and away, east and west are constantly being used to defend invisible boundaries and thus create psychological distance between people, nations and continents” (Kinnvall, C. and J. Lindén, “Dialogical Selves between Security and Insecurity: Migration, Multiculturalism, and the Challenge of the Global”, Theory & Psychology, Vol. 20 (5), 2010, pp. 595-619). On a micro level the fear of the other has always been overcome in a time of tragedy or crisis however rather than appealing to this basic understanding of commonality the current climate exploits the fear of otherness.

‘Foreignhood” – the original recording draws on 32 voices from as many countries, many speaking in a language which is not their mother tongue –  addresses the universality of the experience of otherness. The recognition affords the possibility of commonality and defuses fear and distrust. Please add your voice to the growing community of foreigners.

The artists wish to thank the many foreigners whose voices, time, and generosity made this work possible.

To listen to the work so far use the QR 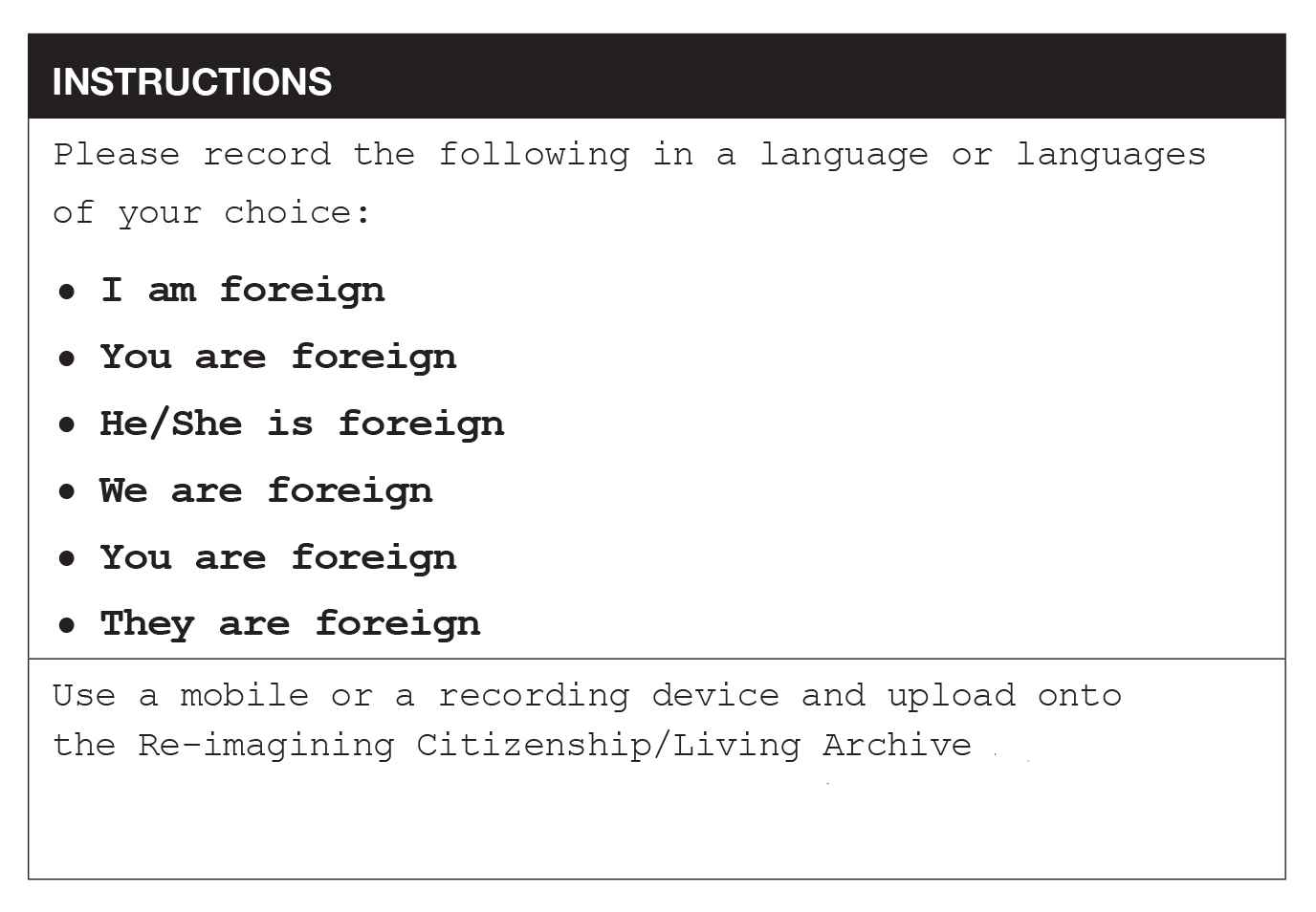 Lagom Hällsten & Óinseach O’Neill
Johanna Hällsten is a Swedish born artist now living in the UK. Working with text, sound and performance, Hällsten’s work focuses on translation between different cultures, species, and forms, to address the interrelation between sounds and environments.

Mary Rose O’Neill is an Irish born artist who now lives between France and the U.K. O’Neill’s work address issues related to narrative, memory, loss and failure. Working with text, images, and performance, the work is ‘slight’, leaving little physical presence and in many cases only exists in memory. The text based works are often incomplete encompassing loss and failure in both content and form.