RE-IMAGINING CITIZENSHIP MIGHT MEAN, PARADOXICALLY, TO REJECT THE VERY NOTION OF WHAT CITIZENSHIP STANDS FOR TODAY.

Because of what exactly are we citizens? Neoliberal austerity has eroded citizenship of the nation-state, while power simultaneously has been systemically reallocated to transnational corporations outside of any democratic control. And on a macro-scale, even if our nation-states would continue to be viable as democratic entities, they lack the capacity to structurally challenge species threatening crises such as climate change. So, the urgent question would be, of what kind of transnational social contract do we want to become members of? How would it enable us to gain equal, transnational access, to economic participation, health care, education, culture, while acting upon fundamental principles such as gender equality and anti-racism? 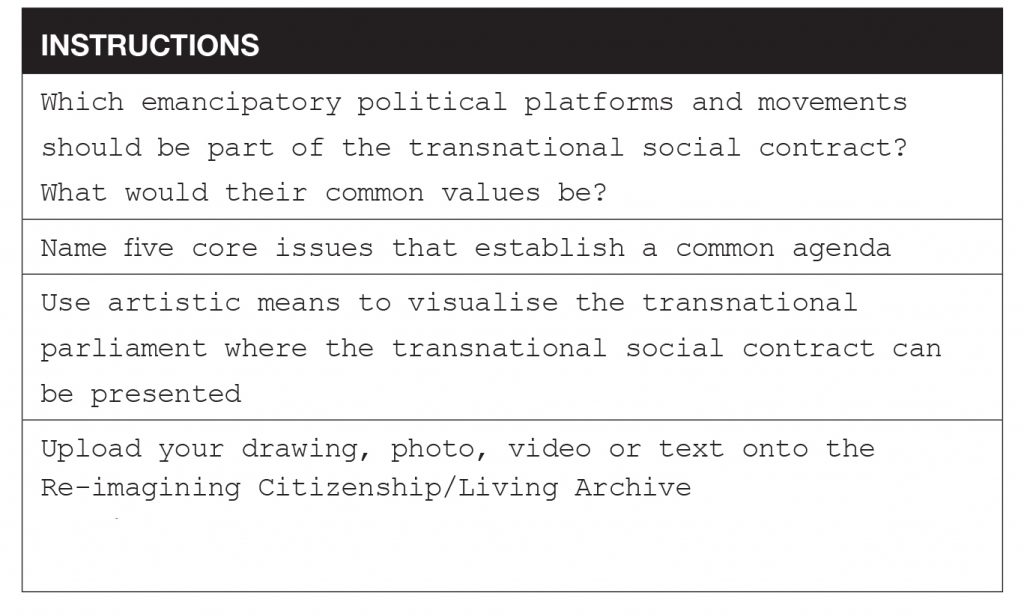 Transnational citizen Staal
Jonas Staal is a visual artist whose work deals with the relation between art, propaganda, and democracy. He is the founder of the artistic and political organization New World Summit (2012–ongoing) and the campaign New Unions (2016–ongoing). With BAK, basis voor actuele kunst, Utrecht, he co-founded the New World Academy (2013-16), and with Florian Malzacher he is currently directing the utopian training camp Training for the Future (2018-ongoing) at the Ruhrtriennale in Germany.