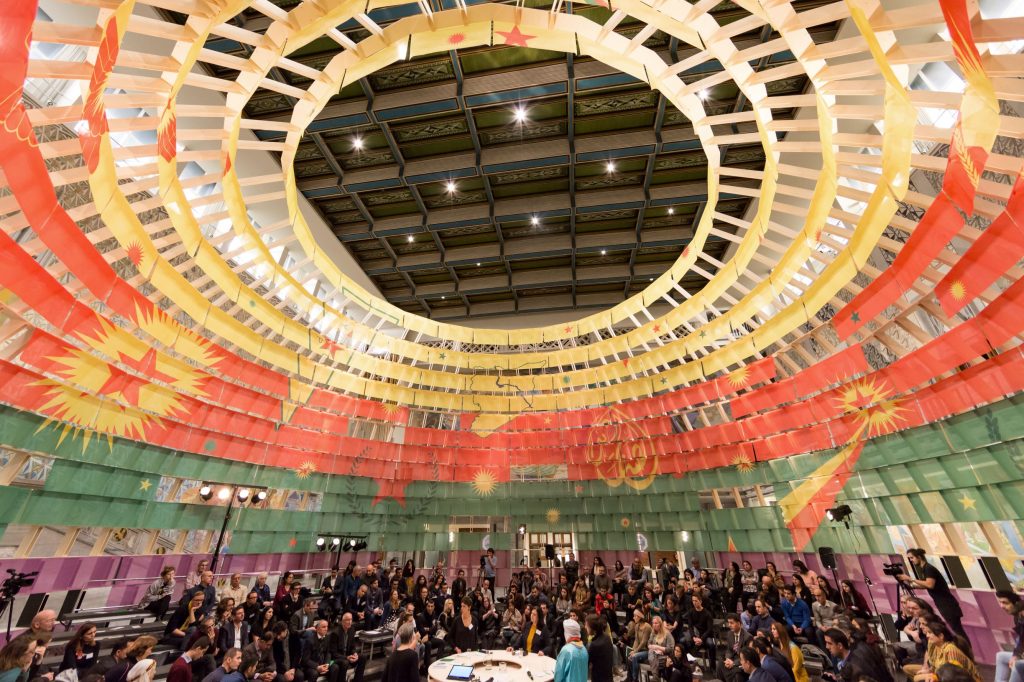 Propaganda art has long been discredited as a byproduct of the age of totalitarianism. But is propaganda by definition a force of mass manipulation and indoctrination? From the first and second anti-colonial propaganda movements in the Philippines to the call for a “feminist propaganda art” by Lucy Lippard, there are various alternative historiographies that articulate the possibility of a popular propaganda art as a project of mass emancipation. In this lecture, Staal will introduce his research on various conflicting forms of propaganda art in the 21st century, with an emphasis on the manifold performative assemblies of precarious peoples across the world, that articulate new forms of emerging power in squares and occupied universities. In these assemblist practices, new collective imaginaries are constituted that aim to establish new norms and hegemonies structured on egalitarian political principles. Contemporary art, Staal will argue, forms a crucial component in translating these emerging imaginaries into symbols, narratives and infrastructures of a new emancipatory political project. Through examples of various artists, as well as from his own practice, he will explore the conditions for an emancipatory propaganda art for the authoritarian post-truth age.

Jonas Staal is a visual artist whose work deals with the relation between art, propaganda, and democracy. He is the founder of the artistic and political organization New World Summit (2012–ongoing) and the campaign New Unions (2016–ongoing). With BAK, basis voor actuele kunst, Utrecht, he co-founded the New World Academy (2013-16), and with Florian Malzacher he is currently directing the utopian training camp Training for the Future (2018-ongoing) at the Ruhrtriennale in Germany. Recent exhibition-projects include Art of the Stateless State (Moderna Galerija, Ljubljana, 2015), After Europe (State of Concept, Athens, 2016), Museum as Parliament (with the Democratic Federation of North Syria, Van Abbemuseum, Eindhoven, 2018) and The Scottish-European Parliament (CCA, Glasgow, 2018). His projects have been exhibited widely, among others at the 7th Berlin Biennial (2012), the 31st São Paulo Biennale (2014), the Oslo Architecture Triennial (2016) and the Göteborg Biennale (2017). Recent publications and catalogs include Nosso Lar, Brasília (Jap Sam Books, 2014), Stateless Democracy (With co-editors Dilar Dirik and Renée In der Maur, BAK, 2015) and Steve Bannon: A Propaganda Retrospective (Het Nieuwe Instituut, 2018). His book Propaganda Art in the 21st Century is forthcoming from the MIT Press in the fall of 2019. Staal completed his PhD research on propaganda art at the PhDArts program of Leiden University, the Netherlands.