A SOUND MEAL FOR 7/8 INVESTIGATES RHYTHM NOT AS THE REPETITION OF THE SAME BUT AS THE UNPREDICTABLE INTERPLAY OF DIFFERENCES; RHYTHM AS RESISTANCE TO THE HUMDRUM; RHYTHM AS WHAT MAKES US WHAT WE ARE WITH ALL OUR HOPES, SKIPS AND JUMPS; RHYTHM AS A STUBBORN BEAT THAT WILL NOT DANCE TO SOMEONE ELSE’S TUNE; RHYTHM AS A PATTERNING OF CITIZENSHIP…

As part of their Rhythm Resistance Project, performance artist David Stickman Higgins and performance-philosophy practitioner Fred Dalmasso shared meals with Nottingham-based mixed-heritage families within their own home soundscapes. At each family table, either David or Fred was a complete stranger who listened while they cooked, talked and played, but said a few words. Then rap artist Thomas Juga-naut Higgins edited the encountered motifs, patterns, themes, words, sounds or silences into a choral piece, a sound meal, to which you are now invited to contribute to: 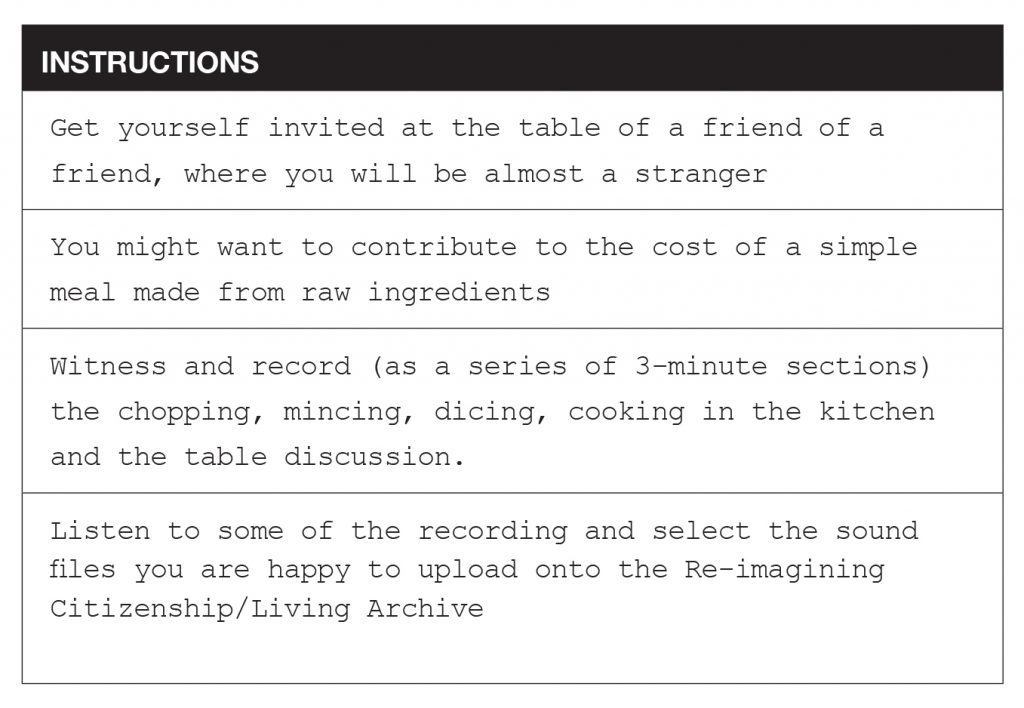 Syncopated citizens Dalmasso and Higgins
Fred Dalmasso is a performance philosophy practicioner and researcher (www.collect-ifs.org). He might have learned early on from migrant grandparents – and the choice of nationality they had to make in the late 1930s, of the risks in equating nationhood with citizenship. In turn he became a migrant, albeit of the privileged kind. It was easy for him to contemplate citizenship as merely a case of getting used to a European city of his choice. He now faces a reframing of citizenship that urges him to re-think this notion. So far, he has only been at ease with the idea of a syncopated citizenship that draws its relative stability from the very possibility of being at times in recess and often somehow out of tune.

David Stickman Higgins is a performance artist. He draws from African traditions and performance styles to reflect on his own British-Barbadian heritage and create innovative person-centred environments to share and learn with others. His work combines music, performance and poetry to connect with other cultures and marginalised communities and rely on risk-taking and exchange.